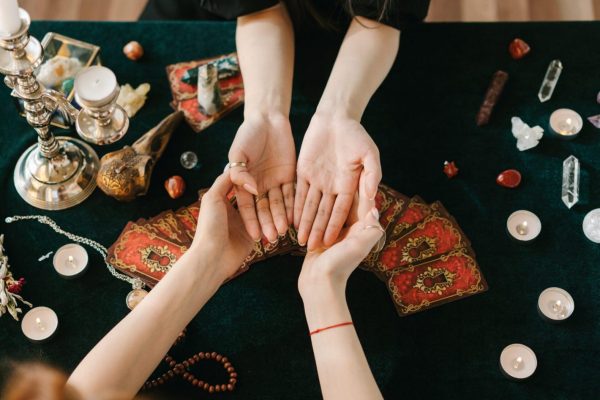 When it comes to psychic counseling, mediumship, and any other trade that deals with channeling supernatural forces, the traditional Christian view towards them isn’t exactly favorable. In fact, in the early days, anyone found dabbling in the supernatural would be deemed to be an evil man and woman who would then be put on trial, impending horrible fates.

Nevertheless, as we have progressed through the ages and the Bible has been put under a more liberal, inquisitive, and progressive light, many Christians have also claimed that God does not forbid everything related to psychic practice and divine connection may not entirely be as much of a sinful activity as thought before.

In order to understand the view of Christianity and God himself as depicted in the Bible, let’s now take a closer look at the traditional and modern Christian criticism of psychics and everything that they represent.

The Traditional/Old Point of View

Leviticus 19:31 – “Do not turn to mediums or necromancers; do not seek them out, and so make yourselves unclean by them: I am the Lord your God.”

Any Christian will immediately recognize those words from the Bible and it does indeed act as a clear warning from God to all His people. Just before the Children of Israel entered the Promised Land of Canaan, the Lord warns them against pagan practices involving human sacrifice, divination, sorcery, witchcraft, spell casting, omen interpretation, mediumship, psychics, and necromancers.

Then there is the tale of the rebellious King Saul who defied God and sought wisdom and counsel from the famous Witch of Endor just before being attacked by the Philistine army.

On being asked to communicate with the Prophet Samuel who was already deceased at the time, the witch mentioned a hooded figure that she saw rise out of the ground. King Saul believed it to be the spirit of Samuel and bowed down in respect. However, since the king did die by his own hand after being wounded by the enemy, it would be fair to say that his fate was not in the least bit helped by the séance. 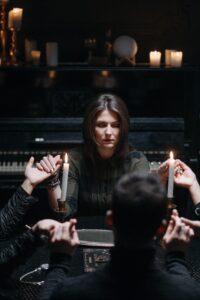 This tale of King Saul seeks to highlight the following facts in the traditional view.

As it turns out, the hooded spirit seen by the Witch of Endor was likely a demon disguised as the Prophet who predicted his demise correctly and told the truth as Saul and his sons would go to hell after death where the demon originally came from and thus be with the evil spirit.

In accordance with the traditional Christian view, modern psychics and mediums are little more than vessels for evil spirits to enter and manipulate as they please. The worst part about going to psychics and mediums seems to be the ability and the tendency of the demons to mix truth with lies in order to deceive the unsuspecting man or woman.

As these evil spirits do possess a significant number of supernatural abilities, they are at times able to look into the future and predict certain events which may also initially help the individuals. These are done to gain trust and credence but there’s always an ulterior motive that will invariably be malicious for all intents and purposes.

To illustrate this matter even further, we can take many examples from the Bible itself, where evil spirits try to deceive saints and even confront our Lord and Savior Jesus Christ Himself. For example, a man possessed by a demon in Capernaum confronts Jesus by saying,

“What have you to do with us, Jesus of Nazareth? Have you come to destroy us? I know who you are—the Holy One of God.”

Jesus was able to chide and exorcise the unclean spirit almost immediately and it was clear that while being evil and of ill-intent, the spirits would still obey the Lord and his son.

In conclusion, it can be stated that the traditional view of the psychics and mediums is not a positive one in Christianity and it is written clearly in the Bible that God forbids all supernatural counsel except those that we seek from him or his Prophets.

The Modern Christian View on Psychics and Mediums

While impostors, charlatans, and witches are still shunned by even the modern Christian community as a whole, it would be fair to say that similar beliefs are not always shared when it comes to psychics and mediums. In fact, a number of strong believers of the Christian faith are also among the best Christian psychics in practice today.

In order to understand why the perception has changed so much as compared to the early days, one needs to first acknowledge the fact that the term psychic or medium is often misused and misunderstood.

Although the Bible clearly mentions that one should stay away from them, the “psychics” and “necromancers” of the ancient pre-Christian pagan world were nothing like the messengers which you see today. Instead of being false prophets who worship false gods and idols and seek to stray true Christians away from the path of God, they seek to help everyone follow the path shown by Him instead, just like every true Christian who spreads the teachings of the Lord is supposed to.

Spiritual guidance, which a true psychic seeks to provide to those that come to him/her isn’t exactly based on foresight, which is a result of demonic possession or influence. Instead, it is more like a heightened and sharpened intuition that acts as a guide for the psychic and those around him/her.

They sense energies and the “spirit”, which Christian psychics often refer to as the Holy Spirit. An argument brought forward by many psychics who are also strong believers of the Christian faith is the fact that every real psychic is born with those gifts and since it was God Himself who chose to endow the particular person with some special gifts, who is a man to judge him/her?

“Judge not, that you be not judged. For with what judgment you judge, you will be judged; and with the measure you use, it will be measured back to you.” – Mathew 7:1 – 5

What Should You Believe In?

The belief of every man and woman is his or her own so there is no “right” way to believe and as civilized Christians, we have earned that much in terms of religious liberty. Having said that, when it comes to psychics, it can get quite confusing. On one hand, the Bible clearly instructs all Christians to steer clear of such men and women and seek guidance from Him instead.

On the other hand, there is no denying that some psychics do show certain surprising abilities to sense and guide people spiritually on the right path as instructed by God. And, since a lot of them are devout Christians who have shown no other signs of deviating from the path shown by our Lord, there is no reason to believe that they are being guided by evil spirits either.

Then there is the consideration that there were multiple prophets of the Lord throughout the ages and many men and women touched by them did inherit a bit of the divine grace from them. While charlatans are definitely still among us, a psychic doesn’t necessarily mean an impostor by default. It is possible that they might be able to help you seek the same guidance that you seek from the Lord in Heaven, but maybe just a bit better and faster than usual.