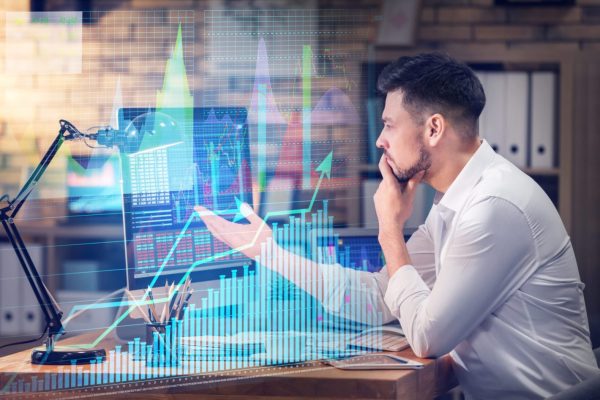 We’re told not to put all our eggs in one basket. The idea is that each basket performs differently at different times. During a crash, at least some of your portfolio is supposed to hold up.

What do you do when all the baskets get hit by the same earthquake?

Usually, when stocks are crashing, bonds surge. But this time, bonds have performed even worse than stocks by some measures!

Property, a favorite hedge for inflation because of its tax advantages and the leverage used to buy it, is plunging too.

Gold is fairly flat, especially in currencies other than the US dollar. But it’s supposed to surge at times like this.

Utility stocks are a favorite defensive investment, but they’re being hammered by disruption and government intervention like price caps.

Bank stocks are supposed to benefit from rising interest rates. But not this time. There’s a panic over interest rates going too high and too fast for their customers.

Basic necessities like food are caught up in the supply chain and fertilizer and energy chaos. So those stocks are struggling too.

Energy stocks are performing quite well, but the government is intent on crushing the most important parts of their businesses in the coming years.

Commodities keep booming and busting erratically and they’re not usually a good way to play market crashes. I suspect a lot of the commodities boom is explained by underinvestment, which only makes commodity producers look profitable in the short term because they’re not spending money on new projects. In a few years’ time, they won’t have enough revenue.

Cash is outperforming most investment classes lately, which is incredibly ironic given the surge in inflation…

The point is, there’s nowhere to hide from this sell-off. The story we’ve been fed for decades about diversification is not proving to be true so far. Everything is falling together.

Why is that the case, though? What has gone wrong?

Well, central bankers and governments intervened so heavily in the economy that they created an everything bubble. Even the mainstream media figured this out on the way up… which is very unusual.

But what was the everything bubble? Well, all asset prices were bid up to lofty levels.

Bonds went into negative nominal yields, which is another way to say that their prices were bid up to such absurd levels that investors were guaranteed to lose money.

Tech stocks went into a repeat of the tech bubble. Cryptocurrencies soared.

Pundits like Dave Portnoy made a career from claiming that stocks only go up.

But what goes up on a wave of central bank stimulus must come down, regardless of inflation and a bear market. As the economist Ludwig von Mises explained, it’s only a matter of time and severity:

There is no means of avoiding the final collapse of a boom brought about by credit expansion. The alternative is only whether the crisis should come sooner as the result of voluntary abandonment of further credit expansion, or later as a final and total catastrophe of the currency system involved.

Japan is currently testing the theory

In simple English, central bankers pumped up the market to such highs that they must all fall now that the central bank stimulus is being withdrawn.

Previously such price action – the boom and the bust – applied to isolated sectors of the market like property in 2006, tech stocks in 1999, Asian stocks in 1996, and so on. But this time, we’re in the Everything Bubble: the central bankers had pumped up everything. And so, everything must come down together, whatever the economic and financial conditions might be.

Another explanation is that the combination of a recession and inflation is a rare one that is bad for all asset classes. Remember, inflation and recession are supposed to be mutually exclusive.

Economists simply presumed this to be the case until the 1970s.

Investments that rely on a hot economy are falling because of a recession and investments which rely on low inflation are falling as prices surge.

The thing is, both measures are yet to get a lot worse. The Bank of England’s latest forecast is for inflation to top 11%. And a recession is only just emerging as a consensus forecast.

The market route may be only the beginning

Here is one last thing before you go. It’s a simple question:

It’s not just oil, of course. But you get the idea. Our inflation is being driven by commodity prices rising and not the other way around. That means it could end very abruptly, or true inflation could be yet to emerge.