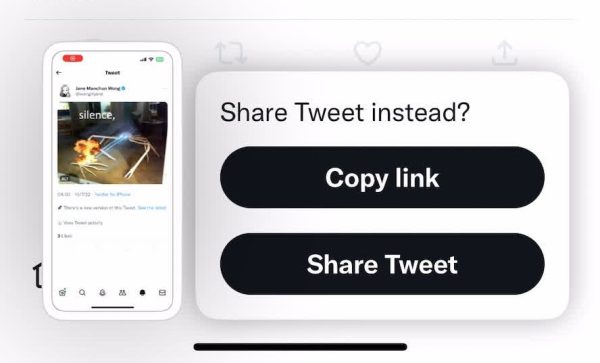 Cross-posting content across social media is something of a modern nuisance. If you have accounts on most of the popular platforms, you’ll see viral trends surge and reappear across them.t. YouTube recently took measures to discourage cross-posting to TikTok and Instagram. Now, Twitter seems to be following along, prompting users to hit the share button on tweets when it detects them taking screenshots.

Screenshots of tweets get shared on Reddit, Instagram, and pretty much everywhere else. Twitter has started displaying pop-ups to suggest an alternate, in-app actions people could take when they try to grab a screenshot. TechCrunch shares multiple reports of pop-ups with buttons to copy a link to the tweet, share the tweet, or both.

So far we’ve only seen these on the iOS version of the app, but its possible testing will extend to Android. App analyst Jane Manchun Wong and social media consultant Matt Navarra give us a look at how some of these prompts appear:

Sharing tweets as screenshots skews engagement metrics for creators on Twitter, misrepresenting the actual number of people their content reaches. Twitter presumably interested itself because it can’t monetize views of screenshots once they end up on another social media platform.

One of these now pops up when you take a screenshot 👇 pic.twitter.com/YY0GtF3lVb

We will concede that Twitter deserves credit for using a pop-up to discourage this behavior, instead of just trying to block screenshots altogether.

Some loyal Twitter users suggest an ideal middle ground would be to watermark app screenshots, just like TikTok watermarks videos. That might not solve the underlying problem for Twitter, but at least it would give the viewer a reminder of where that content came from.